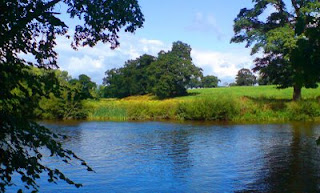 Alarm went at 4am yesterday... well I stopped it going off 2 minutes before to ensure I remained high in the popularity stakes! A couple of pieces of toast into the car and off to the river.
I had deliberated long and hard as to stillwater or river fishing and decided on the latter! I knew that there had been a high tide and that would hold up the water BUT what I hadn't banked on was the reduction in clarity due to the run off high in the mountains of North Wales.
The colour was a passable tea colour at 6am but by early afternoon it was like fishing in chocolate! It was a nice day for a walk but it left me thinking maybe that stillwater would have been better! The ultimate poke in the eye was a cormorant taking a perch in front of me... c'est la vie.
Courtesy of a couple of old chaps, one fishing and one yabbering, a pole and a maggot... here is the only fish of the day... apologies for the quality of the photo, it was taken with my phone. But it did have me thinking of livebaiting for the pike!
Talking of photos... doesn't the river look invitingly blue? The wonders of photoshop!
Isaac Walton wrote the Compleat Angler... I feel somewhat the Incompleat Fisherman... I really need to catch!
Posted by David Edwards at 07:24 No comments: 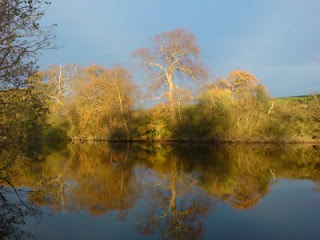 Back from the river... almost gin clear, just a touch of colour. I was there at 6am and there was already one other lure fishing. We introduced ourselves and we then set about covering the water, leap frogging the swims. I had taken two rods... both spinning and fly. Peter, the other piker had a 7ft spinning rod and what would turn out to be the catching combination of the day, a Mepps Aglia in yellow/red combination, amongst others.

The leap frogging resulted in a bit of a blank day for me but yielded 3 jacks for Peter... I was close having a take on the fly BUT I'm yet to perfect setting the hook! Interestingly Peter has also had trouble catching on this stretch of river and had blanked since September... I'd blanked from September to June so I was about 6 weeks ahead of him.

The fly casting is coming on a treat though... so by the time the autumn comes and the pike start really going on the feed I should be able to cast reasonably well.

One of the pleasures of fishing the river is the frequent sightings of the kingfishers, the electric blue flashes zipping about the river. One even took a half glance at my fly!!

The photo is from mid November last year...
Posted by David Edwards at 14:47 No comments:

Water, water everywhere and not a drop... to fish in! 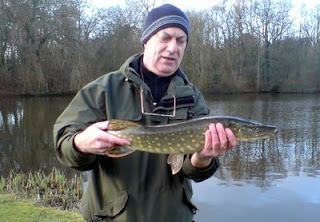 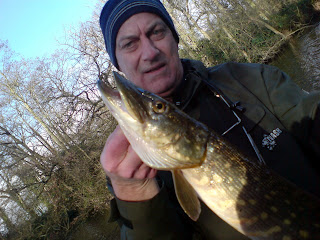 Locating pike waters in the UK is interesting to say the least... It isn't unusual for folk to be possesive about their best fishing hole or any fishing hole for that matter! I suspect as there are perhaps more anglers per square mile than other countries the fish get pressured unless the location is kept secret.
I can understand it to a point but as a reborn fisherman and tyro piker it is difficult to see why, especially when you want to target the species with a degree of success. Just about a year on I have gathered little gems along the way as to where the pike may lie... I've also gone back to using my hunting skills to seek out the "water wolf" and tempt them from their watery lair.
One source of useful information has been Malcolm my barber... it brings a whole new meaning to the old stock in trade saying of "and something for the weekend sir?". I know when the ladies go to the hair dresser it is all talk about Posh'n'Becks, the Colleen and Wayne wedding and Jordan's reductions (she does look better for it mind!). In comparison my chats have been about a local water attached to a minor stately home that I knew when I used to hunt. Very often hounds would tear through his Lordship's garden and "Lordy" would be on the terrace cheering us on. Twice around the lake and back across the fields was the usual run. I'd often stop and pass the time of day with the anglers and then be on my way.
"Lordy" passed away and the house and grounds changed hands a couple of times. An opportunity presented itself at the beginning of the year to fish the lake, I had hoped for it to be more than it was BUT all it ever was going to be was a once in a lifetime shot. I visited the lake one lunchtime just to have a look over it. I was taken aback somewhat, the neatly manicured lawn on one section of the lake had been lost to suckers and saplings, the boat house had been torn down and the plunge pool full of weed. Nevertheless I was going to fish it!
It was either the end of January or early February that Malcolm and I met to fish the lake. We armed ourselves with lures and one deadbait rod. Malcolm had the advantage that he'd fished the lake in "Lordy's" time and a couple of marks later he hit into the first pike of the day. My error that day was fishing lures that were perhaps too big for the venue... or were they? I perhaps wasn't thinking "pike like" enough... who knows BUT Malcolm had four fish and had bid me goodbye before I struck on my pike of the day. A lightly hooked jack of 2 or 3lbs only to see it roll off the hook as I brought it across a narrow channel in the lake system.
Try as I might I cannot get the owner of the lake to allow me to fish it further. We didn't impact on the lake, I even offered to tidy elements of it up in exchange for the ability to fish it. Sadly the lake is suffering from silting and encroaching reeds and I guess that with a few warm summers the lake will be a puddle and the fish no more. Sad to think that 100 years ago the lake was dug by the estate under the watchful eye of the philanthropic owner for the benefit of all. Another bit of heritage potentially lost.
Perhaps it and many other waters will be lost because they are kept secret?
My new water is not a secret in the true sense of the word but pike aren't the main target species so I won't be enlightening readers of the blog as to its whereabouts just yet!
Posted by David Edwards at 20:54 No comments: 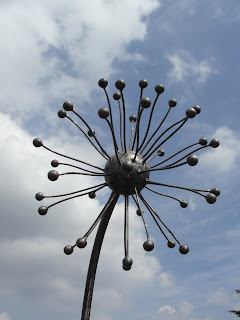 Posted by David Edwards at 13:10 No comments: