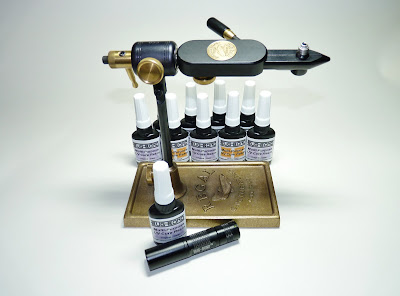 Who is up for a challenge?

I’m pleased to announce that BUG-BOND™ is the sponsor of Fly Fishing & Fly Tying magazine’s new competition…  With a new format for the magazine it should see some interesting submissions over the next few months. There are 4 categories… the winner of each category will receive a BUG-BOND™ “Professional” kit, comprising  2 bottles of Bug-Bond, 2 Tip Kits and a BUG-BOND™ Professional UV light. The overall winner of the competition will receive a Regal Revolution vise , kindly donated by Regal Engineering in the US. The vise in the photo for the eagle eyed has a medallion head… it will be a revolution head for the winner.

So how do you enter?

Well you have to hot foot it down to the news stand and pick up the December issue of Fly Fishing & Fly Tying magazine… it has the rules and an entry form (photocopies are allowed).

No excuses… it doesn’t matter where you are on the globe… have a go.

Happy tying!
Posted by David Edwards at 23:14 No comments: 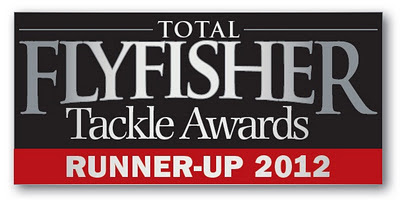 Surprised, stunned and very pleased that Bug-Bond received an award yesterday. The readers of Total Flyfisher magazine had the opportunity to have their say in an online survey. Bug-Bond has received the award of Runner-Up in the Total Flyfisher 2012 Tackle Awards in the Best Fly Fishing Innovation category. We are the top fly tying material! Thank you to all that voted and who continue to support Bug-Bond whether you are a customer, retailer or Pro-Tying Team member... this is your award. 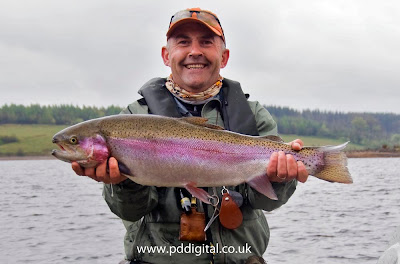 It gives me immense pleasure to announce that Hywel Morgan one of fly fishing's personalities has joined the BUG-BOND™ Pro-Tying Team. Hywel is well known for his TV appearances and gave Bug-Bond its TV début this summer on Keith Arthur's programme "Tight Lines" (Sky Sports).

Not only is Hywel a talented fly-tyer, caster and fly fisherman, he can also convey this knowledge with a passion and humour that is highly infectious...

The smile says it all Hywel... welcome to the team!

I've included Hywel's bio here and by clicking the photo it will take you to his website where you will be able to find out more about his teaching and guiding services as well as his shop which include his DVDs, flies and essentials range.

Who is Hywel Morgan?

Hywel is the son of Welsh fishing guru Moc Morgan and perhaps unsurprisingly he was introduced to the pleasures of fishing at an exceptionally early age.
He first wet a line at just two and a half years of age and spent his early years fishing the Rivers Teifi and Ystwyth for wild brown trout and sea trout. Since then he has fished extensively throughout the UK, Europe, Australia and in the USA.

Having grown up in his father's shadow, Hywel decided to make a name for himself and started competing in casting competitions.
He started at local country fairs, then progressed to the CLA Game Fair where for three successive years he won every event. As a result he was asked not to compete any more so that others could have a chance of winning... and all this before he was sixteen years old.
He then turned to the British Casting Association and started to compete at British, European and World casting championships. During this time he amassed the following titles:

FISHING...
Having been successful in the casting scene, Hywel decided to return to fishing. He has represented Wales on twelve occasions (and has been captain for his country three times). Six times were at home internationals, where he was Top Rod on three occasions. The other six were at World Championships, where he captained the Welsh team to a silver medal in Ireland in 1995 and was a member of the silver medal winning team at England 2000. Individually he has been one of the most successful competitors from all the home countries, gaining results in silver, 4th, 7th and 10th places..

Hywel has worked as a tackle consultant for numerous companies over the last eight years, helping to develop products for the British Market.

Hywel has presented programmes on fishing for Discovery Realtime, Horse and Country TV, Welsh TV channel S4C for a few years. He also has over 10 DVD titles on sale now. He has also made appearances on 'Record Breakers', the 'Big Breakfast' and has been a guest on Sky TV's 'Tight Lines'.

Posted by David Edwards at 08:19 No comments:

The Sandford Bullet... bite on that! 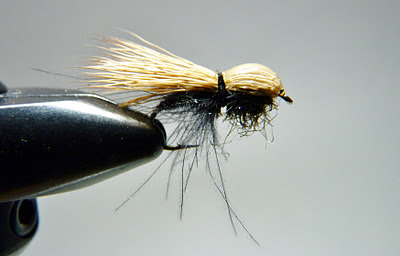 My dear friend Chris Sandford designed the much vaunted "Bullet" in his sleep... how many of us design things in our sleep? Sleep is a time for recharging the batteries but so often I wake at night thinking "Ah!" Little wonder then that Chris designed such a catcher as this... so what does it represent?
FISH FOOD was the answer from one of Chris's chums...

If you look closely at the fly that Chris Sandford kindly tied for me at the Burton Fly Fair you'll see that Bug-Bond has been applied to the head... just enough to ensure that the fly lasts more than just a couple of fish. That's Chris's addition since designing the fly and compiling the step by step.

Back to the "Bullet"... I have ordered all the component parts and will be having a go myself... but WHY? Well the "Why?" revolves around a need to tie something other than pike and saltwater flies... like a child I'm increasing my vocabulary! It also has something to do with the fact that I'm looking for a new water... a dictate from the bailiffs at my local water is that all pike under 7lb have to be killed. It is something I can't get to grips with... the pike is a great adversary "Mr Nasty" of the fish world... but I love them too much. Its OK to take the odd fish for the table but undertaking fishery management with no science behind it I find abhorrent... with roach being regularly caught at over 2lbs the pike are hardly having a major impact.