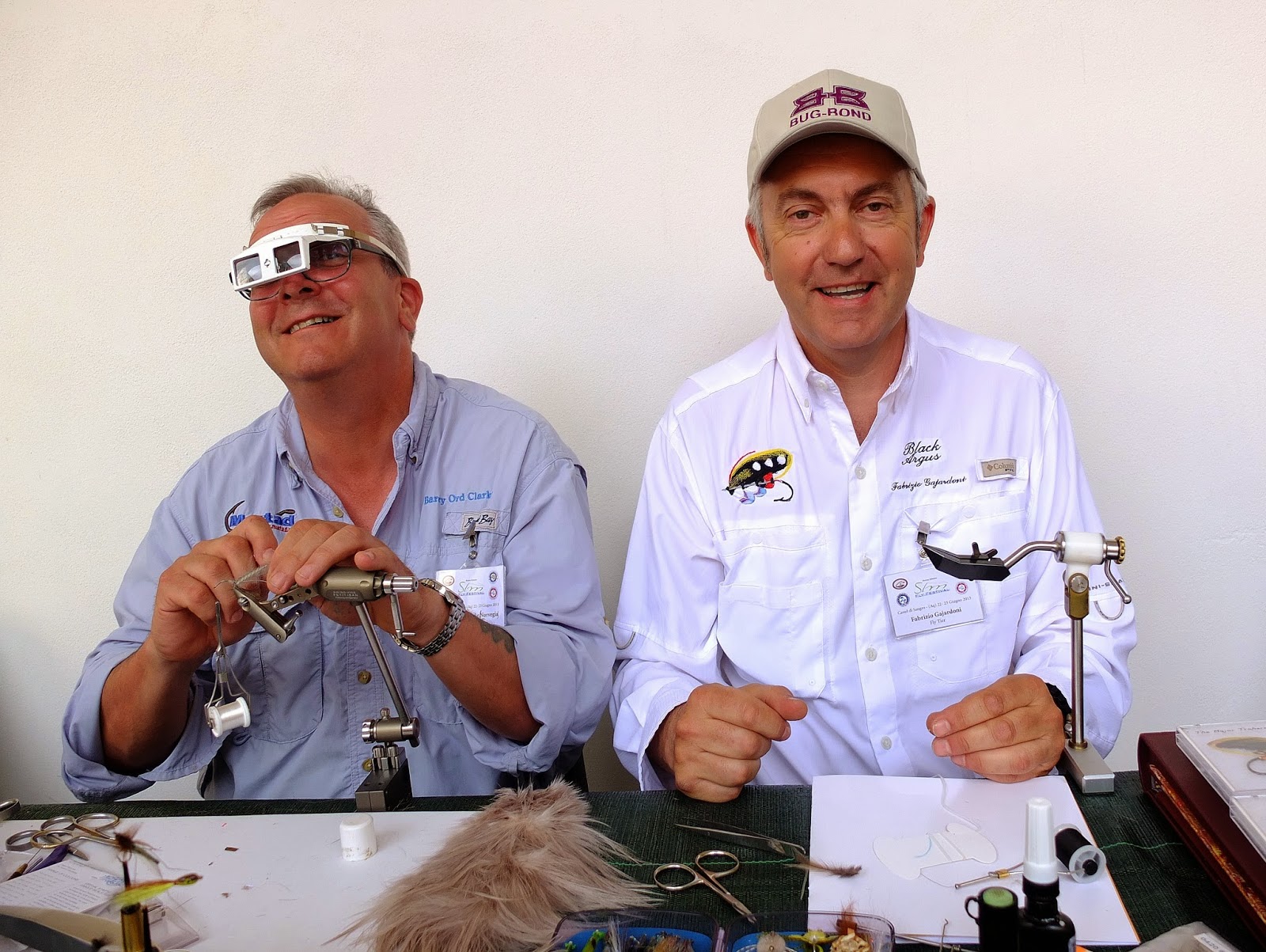 I am really looking forward to being with some of the finest fly tyers around this weekend at SIM Fly 2014 in Castel di Sangro, Abruzzo, Italy. It will be an absolute joy to meet up with friends old and new.

While I'm away you can feast your eyes on Chris Sandford's STUFF! Episode 6 no less...

http://www.chrissandford.com/chris-sandfords-stuff#Episode6
Posted by David Edwards at 19:41 No comments:

I have rather neglected the blog and I can't believe it has been almost 12 weeks since I wrote anything... a lot is going on and in a little over 2 weeks I'll be in Italy at the SIM fly festival. I better brush off the vice and get cracking on some ties for Italy, however, first off some news.

Back in February at the British Fly Fair International a good friend and long time supporter of BUG-BOND joined the ranks of the team - Jerry Lee - I posted it on Facebook and somehow managed to miss the all important blogroll! 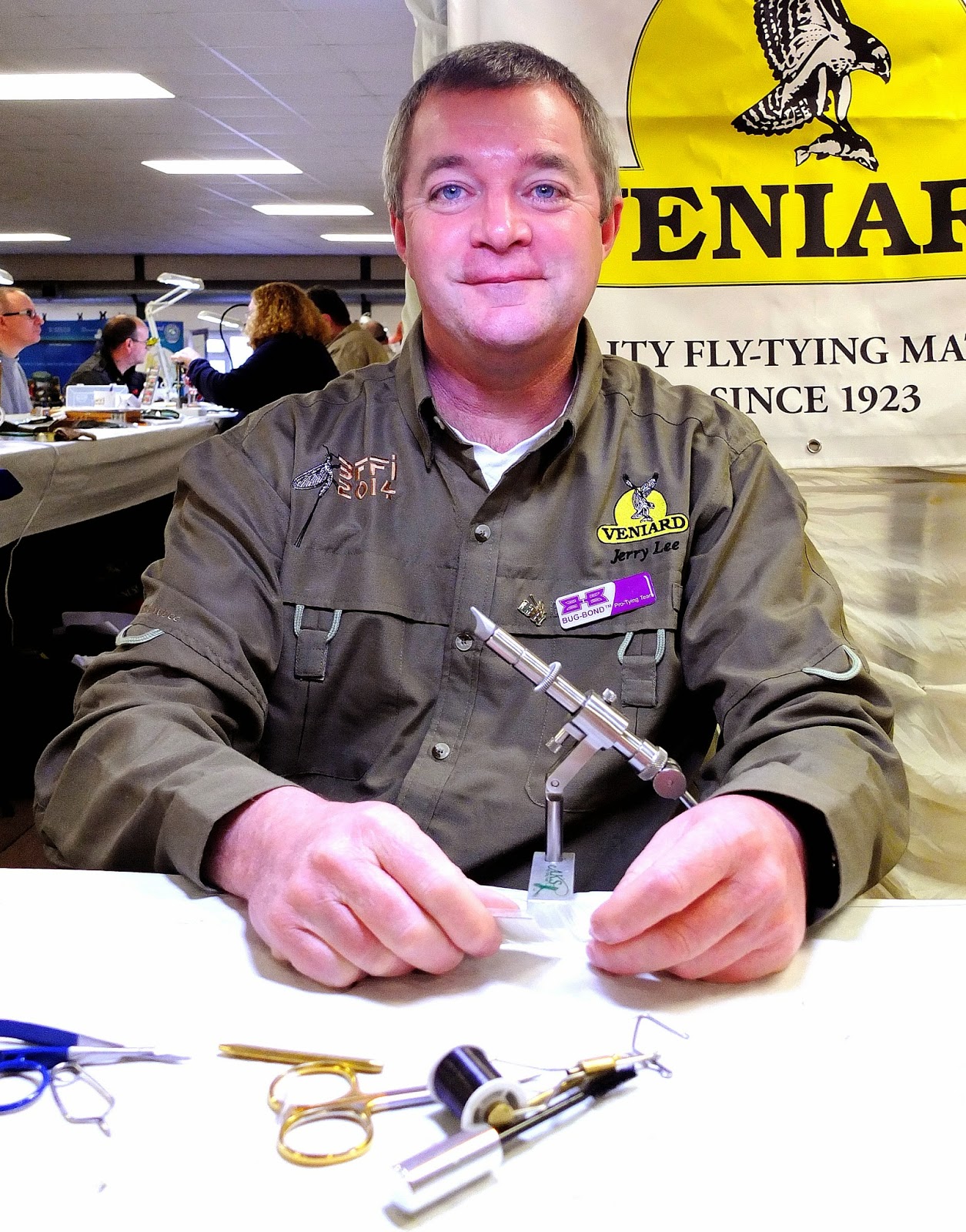 More recently another long time supporter of BUG-BOND has joined the team... Roger Enger Lie from Norway. Roger is part of the Guideline Power Team and it is a great association as Guideline distribute BUG-BOND in Scandinavia. 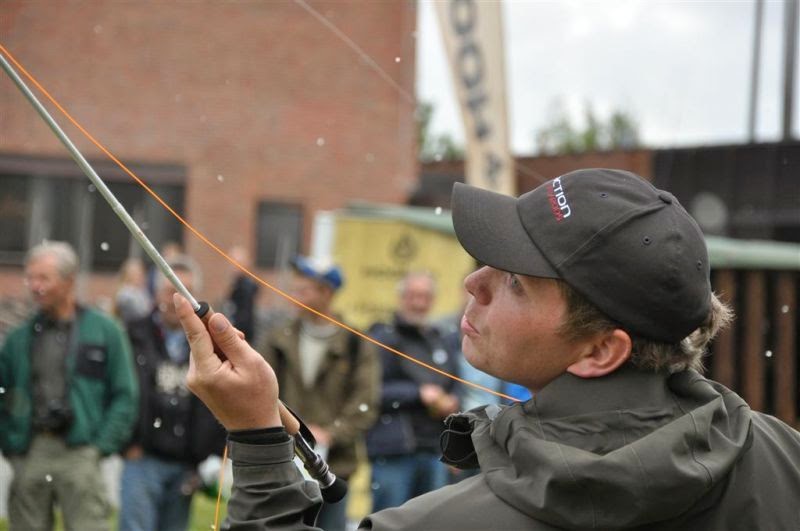 I am keen to learn more this year and will be watching these guys and a whole host of other folk... in fact although I'll be showing off BUG-BOND at SIM I will be there to learn.

What follows are Jerry's and Roger's biographies and a few photos...

Welcome to the team guys!

Born in North West Norfolk, where small chalk streams rule, his interest in fishing started when at the age of 7 he was taken fishing by his father, and beyond his wildest dreams caught a small rainbow trout.  Throughout his school and university years fishing was always a significant element to his leisure time, even when living in the hearth of the east end the River Lea was only a short cycle ride away across Hackney Marshes.

Family holidays to were always sited close to water, both running and still.  His father a keen saltwater fisherman encouraged Jerry’s obsession, tolerating late evenings and small biting critters as he chased every fish in the local region.  Tying wool and fluff on hooks was all part of that adventure.

His real fly fishing passion kicked in when he met his partner Jo, who along with her family took him to Mayo in .  Fishing on , he hooked and landed a 5lb wild brown trout on a small dry fly.

What happened next was probably natural progression.  Whilst in Derbyshire on a short break he was encouraged to buy a new fly tying kit, and within 3 months, at Chatsworth Angling Fair was a member of the Fly Dressers’ Guild.  Membership of the Thames Valley Branch and then the Chilterns Branch followed.  During this time he was given the opportunity to join the Executive Committee of the Guild, serving as General Secretary for 5 years.  During this time Jerry was lucky to meet so many people, some who have become very close friends, and the ability to promote fly dressing to those new to the art.  Countless beginners encouraged to have a try and given the chance to experience fly dressing first hand.

In 2008 a new job took him and his family north from Oxfordshire to and Wharfedale.  The Leeds Branch followed as the next group, and a new era in Jerry’s fishing journey, with him starting to learn how to fish rivers all over again, like going back to his childhood, and tying and fishing soft hackle wet flies.  Today he feels very privileged to be part of a very small number of anglers granted permission to fish a private reservoir in , which also includes a natural head of Grayling.  And what fly is his first choice at this location……the Black and Peacock Spider, the fly he and the Guild used to such great effect, introducing all those visitors to have a go at tying flies at shows all over the country.  He proves it still catches wild fish from wild places.

Jerry ties flies in all categories but has a specific passion for traditional wet flies and nymphs.  He first came across Bug-Bond via a fishing colleague who used it for bass and mullet about 5 years ago.  Slowly Jerry has experimented with it and its novel approach in his flies. 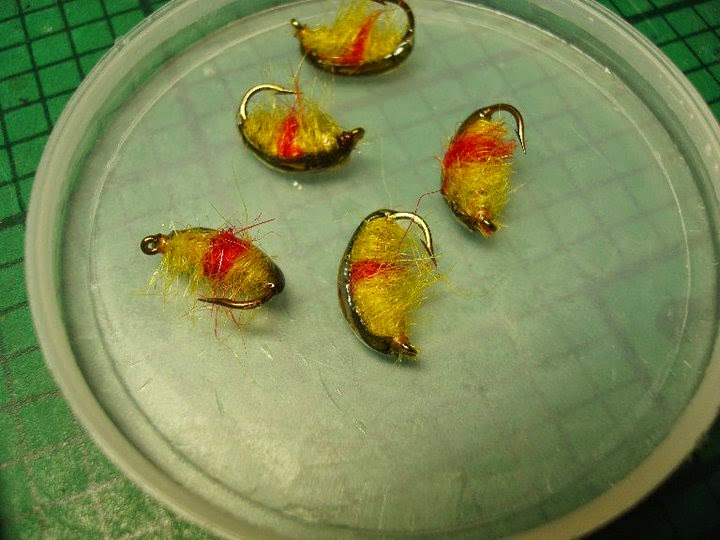 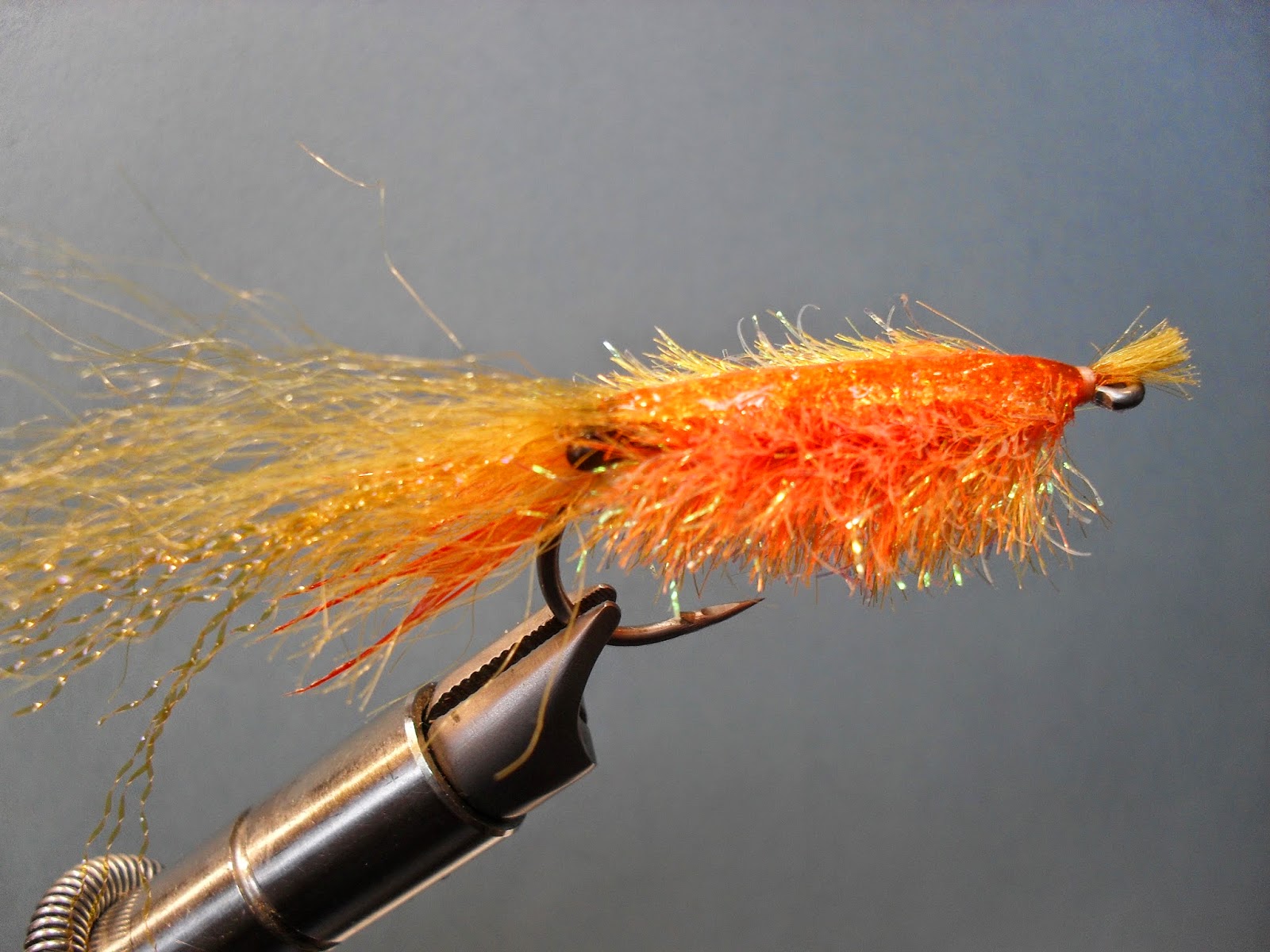 Hi my name is Roger Enger Lie and I live in a town called Elverum, Norway and I’m 30 years old. Elverum is also my place of birth and from the age of 12, I started my fly-fishing career hunting for trout and grayling. I also enjoyed fishing for perch for a while. I started tying flies when i was 14.

Fly tying and fly casting has been an obsession of mine the last ten years. I fish dry flies, nymphs and streamers from time to time. My favorite is dry fly fishing for char in the clear, Norwegian mountain lakes. This is a real challenge and that’s the way I like it.

I work as a teacher and I'm in the Guideline Powerteam in Norway. Does both fly tying and fly casting instructions for shops that sells Guideline merchandise. In the summertime, i work as a fly-fishing guide in the river Rena. I tie everything except salmon flies. At shows I normally tie flies for trout, char and grayling. 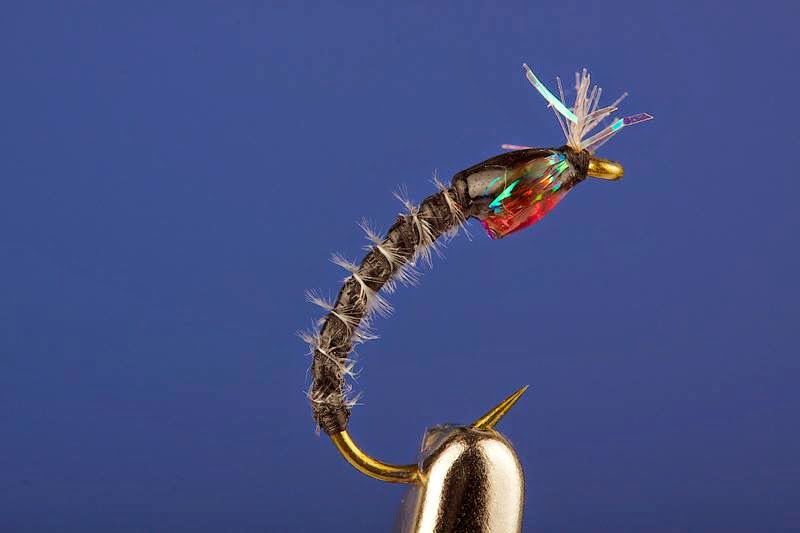 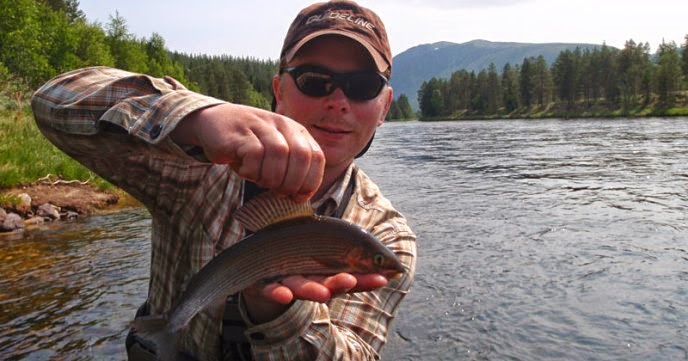 A lot to envy there!
Posted by David Edwards at 00:02 No comments: