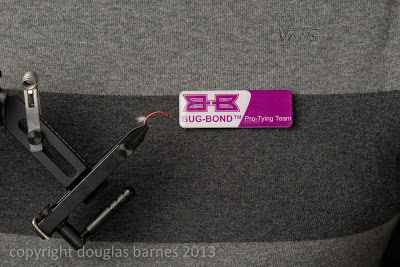 Over the almost 4 years BUG-BOND has been in the public eye it has gained recognition from all corners of the globe and that is down to the fly-tyer trusting the material to do the job... the head of one fly tying distribution business said of BUG-BOND back in April 2010 "It does what it says on the tin!"

Grant Bench from Orem in Utah is one of the fly-tyers that trusts BUG-BOND to do the job... Grant, however, needs materials to perform flawlessly as he is a professional guide... not just any old guide but an Orvis endorsed guide... and he guides at Falcon's Ledge (Orvis Fly Fishing Lodge of the Year 2012). Add to that he's an Orvis contracted fly tying designer with 11 patterns in the catalogue sets Grant's stall out as one of the best. In short he knows how to tie a fly well... not just for show but as food for fish that paying guests want to catch. As always the proof of the pudding is in the eating... hence the Orvis endorsement.

I've been corresponding with Grant for a while now. Based on his work and the constant desire to learn and to share what he knows I invited him to join the BUG-BOND Pro-Tying Team... 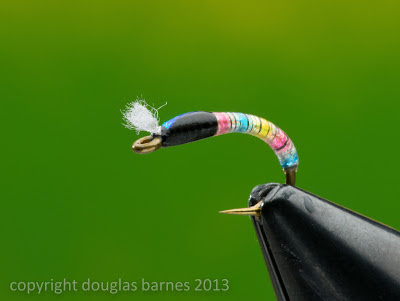 I having written a little about the man I asked Grant to do a bio here... So in his words...

"I've been tying flies for half my life and feel fortunate to have the opportunity to learn from a plethora of great tyers. Some you have probably heard of, and some you haven't. Having a constantly learning mindset has helped my tying but also my fishing, casting and others aspects of the sport.

I learned to fly fish on small farm ponds in rural Missouri but credit my Uncle David Lloyd for igniting a passion in me that will last a lifetime. Fly fishing and tying has now become a lifestyle and it wouldn't be possible without the unfailing, loving support of others including my amazing wife Holly. I've had the chance to guide at Falcon's Ledge in Altamont, UT for the last 7 seasons. It's there that I have learned from and come in contact with incredible fishermen and tyers such as Phil Rowley.

I've recently joined up with a few organizations to help others to see and understand that fly fishing is more than just a sport. Wearepals.org is a non-profit group dedicated to providing underprivileged, at-risk youth with ways of using fly-fishing as a vehicle toward healing, therapy and direction in life.

I speak three languages because of time spent in Ukraine for my church. Learning Russian and Ukrainian has helped me to overcome cultural and language barriers and I've grown a deep appreciation for the people of that part of the world.

A father of a 5 year old keeps me on my toes and has helped me to develop more patience than Mother Theresa and I would say that as a guide, patience would be my best character trait. I've also recently joined the Loop Army and am really excited to learn from those greats around me including many from Europe.

Handling the fly tying side of the popular blog www.outsmartingfish.com, participating as a contract fly designer for the Orvis Company, and tying at shows throughout the Intermountain West has helped me to share my passion with others." - Grant Bench


Grant, thanks for sharing your talents and welcome to the team!
Posted by David Edwards at 12:05