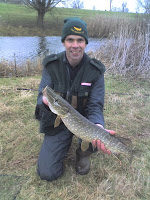 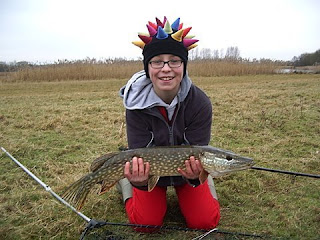 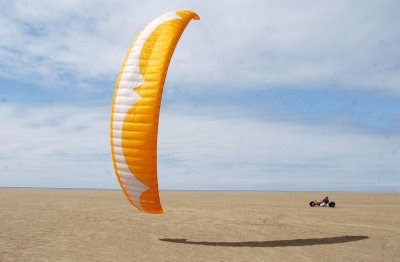 Spot the odd one out? No… Oh, is it that there is a connection? Yes… Now guess the connection!

It is what we used to do… I haven’t hung my kites up totally – having said that, I only went out once last year… too much piking! Dave Tough or Tufty as I know him was a fellow kite buggier or parakarter and we were members of Wirral Sand Yacht Club. In 2007 we took part in a 24 hour event to break and set a new world record for the furthest distance travelled in a kite powered vehicle (that's me in a promotional shot for the event). The event was a great success and the new record set lasted 12 months (broken in 2008 in Germany!). The event was incredible but so much work went into it I suffered burn out! So I went fishing… which is where the blog all started.

I was on the phone one evening to Tufty and said that I’d been fishing and found by sheer chance that we both fish for pike. It is amazing that we never talked about fishing previously… anyway Dave (Tufty) has sold his kites and buggy and is back to his fishing ways. I needled him back in September or October by sending him a picture of my fly caught pike and he returned the favour last weekend.

Dave and his son Daniel had three pike on Sunday… Daniel getting his first and the first of the day… Fantastic! Daniel looks as pleased as punch and so he should, what a great looking fish!

I’ll have to see if I can organise a piking trip to Dave’s neck of the woods.

Now that looks fun.You learn something new about somebody every day.My passion has been birds and have traveled the world in search of them. I need two more species to brake the 2500 mark and am hoping to do that next weekend in The Drakensburg mountains.
Soz for not being around lately Mate but the internet here is ...well lets just say rather shoddy to say the least.
Have a top week mate

Crazy Pikers! My other vice is Microlighting. Broke a string of blanks today Dave with an ugly 7lb jack from the Bridgewater canal. Not the prettiest or biggest pike i have caught but Very welcome.
Regards
Mike

Nice piece Dave! Was great to see Dan's face when he banked his first! Tuffty's guiding service is happy to take bookings........... you will probably catch nothing though!!