I’m getting ready to fly out to Italy this week for the SIM Fly Festival at Castel di Sangro in Tuscany… well someone has too! I’ll be meeting some great friends, both old and new… the BUG-BOND Pro-Tying Team will be well represented with Barry Ord Clarke, Andres Touceda and Fabrizio Gajardoni… I’ll also be there as will long time user of BUG-BOND… Martie van den Brand, who makes exquisite larger than life museum pieces. There are a host of other tyers I have never met that I am keen to meet… along with Alberto Calzolari who I last met in the USA!

But that’s not the reason for today’s blog…

There have been a number of sightings of a new piece of kit over the past 2 years… I’ve kept it close to my chest largely but with design protection in place I feel that I can make an announcement.

R&D for BUG-BOND never stops… it is as near to perpetual motion as you might get. Some people ask me if I ever stop… the answer is no!

So what is the new kit… well it’s an upgrade… we are not going to introduce another new light as we are happy with the Professional UV Light I introduced at the British Fly Fair International (BFFI) two years ago.

Powered by a single AA battery the Professional UV light set a new benchmark in curing UV resins for fly tying… great curing with long battery life we had cracked it. However, as mentioned I don’t stop still and I was already designing the next phase.  The next stage was to design the light to have a continuous source of power that doesn’t vary… I didn’t want another light and therefore designed an upgrade that uses the existing Professional light and gives us the best of both worlds.  Portability and mains power. 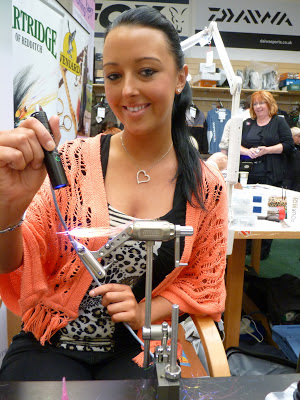 Those who have seen me tie at shows over the past 18 months  or so will have seen the light, though I have been coy and kept it under wraps as far as possible. Now my pal Barry Ord Clarke has a unit and he has been seen at the Swedish Fly Fair and Norwegian Fly Fair with it… not only that he has been photographed using it… the photo  was taken by Tore Litlere Rydgren in Norway (thank you for the photo Tore!). However, this wasn’t the first photo of the light. The first was of Cheryl McCrory at the Glasgow Angling Centre Open Weekend last September. There are other units in operation but I’m not saying where… such is the veil of secrecy! 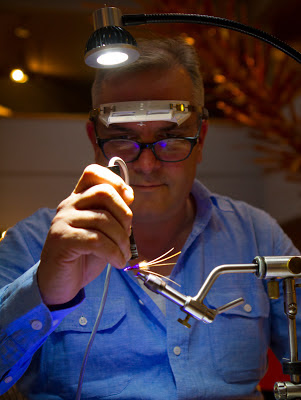 So what do we have… we have the Professional UV light that when the on/off switch is disconnected the unit can accept a remote foot switch that can be powered by both mains via an AC/DC adapter or separate rechargeable battery unit. This gives the user the convenience of mains power with foot operated curing and the portability demanded by the travelling tyer… keep the foot operated switch at home for the tying bench and while on the fishing trip return the light to AA battery operation. I believe this is another first for light cured resins in fly tying... 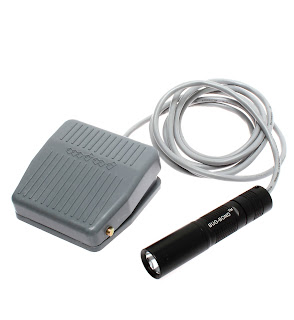 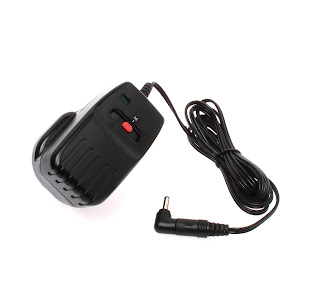 It has been designed as a retro fit for all existing BUG-BOND Professional UV Lights powered by the AA battery.


The product will be in use at the SIM Fly Festival at Castel di Sangro in Italy this weekend and at the BFFI in Staffordshire also this weekend.

The Phantom Phly Tyer may well be making an appearance at the FF Symposium and this latest innovation would definitely catch some lustful attention... 'how might one go about securing such a device...?!
Inquiring Minds Wanna' Know... ;)

Nice features! I never would've thought about the foot operated option but knew I'd appreciate both battery and electricity options! ~Twitch

Thanks for the comments Twitch... and Phantom (Pete Gray) - all will be revealed in due course :)