Competition time! Win a copy of Tapam - the movie 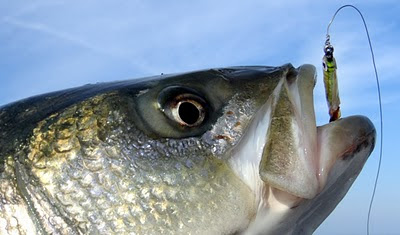 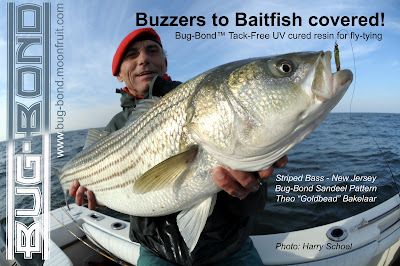 Some might have seen April and soon to be in the May issue of Fly Fishing and Fly Tying the Bug-Bond half page display advert... the story behind the photo is that Theo Bakelaar used his Bug-Bond kit for the first time at the IFTS in Somerset last November and then with a fly he created at the show, caught this magnificent fish! The photo was taken by fellow fly tyer Harry Schoel both friends come from the Netherlands... fast becoming Bug-Bond's second home!

I have cropped the photo to give a mouth shot with the fly and what I would like is for folk to think of a caption and post their thoughts on the Bug-Bond face book page... and I'll announce the winner on 21st April...
What's the prize? Well my friends Daniel Goz and Jan Bach Kristensen have kindly given a copy of their fab movie Tapam. If you haven't seen the film or just the trailer you are missing one of fly fishing's top DVDs... I got infected by the tarpon bug last year... BUT irrespective of whether you like destination fishing or not this is the film!

So dream up a caption and enter the competition and win a copy of Tapam... click here to be taken to the Bug-Bond competition page... and do tell your friends and don't keep it to yourselves... get them to vote for your caption!

Oh and my final verdict is final and a pristine unwrapped version of the DVD will be sent to the winner... Good luck!

Click the top photo to enter the competition and the bottom photo to buy the DVD or the Blue Ray that is coming soon...
Posted by David Edwards at 22:48 No comments:

Hywel kindly dropped me an email this evening after having a play with Bug-Bond... So for all the trout guys'n'gals who feel neglected by my saltwater offerings here is Hywel tying a staple of many a trout... a buzzer. I might even have to try tying one myself! Thanks for sharing Hywel...

Posted by David Edwards at 22:52 No comments: 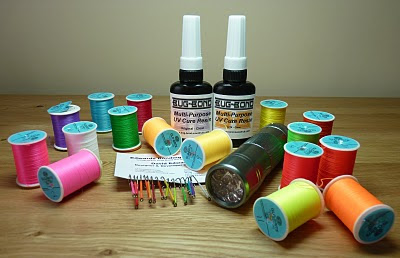 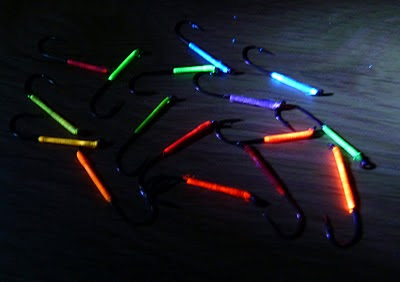 I was recently asked by a potential customer what the interaction was between Bug-Bond and Glo-Brite thread as his experience of other UV cured resins was that that took away the fluorescent nature of the thread. I had one spool of Glo-Brite and did the test and sure enough it did have an effect on reducing the glow... BUT when reporting back I was able to say that another Bug-Bond customer had supplied photos with Glo-Brite thread incorporated in the ties and they positively glowed... so what is the deal?
As fortune would have it I met up with Phil Varney at the Glasgow Angling Centre open weekend and mentioned this to him and Phil kindly arranged to supply 16 spools of thread for the test.
I spent a couple of evenings whipping a couple of layers of Glo-Brite on a size 8 streamer hook and then putting 2 coats of Bug-Bond Original over the top.
The results are that all the threads did well under 395nm wavelength of UV light and retained their fluorescent nature with the exception of Burnt Orange (6), Fl Chartreuse (10), Blue (14), Purple (15), White (16) these threads didn't do so well.
However, whilst writing the blog this morning I decided to try a 365nm wavelength light I'd forgotten I possessed! There was a significant improvement with those 5 threads with the exception of Burnt Orange (6)... Now what do fish see?
I'd say that it was a successful test and that Bug-Bond Original interacts well with Glo-Brite thread with few exceptions.
Posted by David Edwards at 06:36 2 comments: 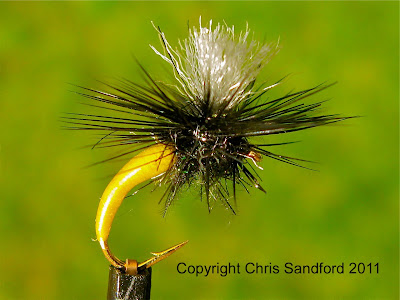 I'm being playfully accused of ignoring the buggy end of fly tying by my pals who prefer the rivers looking for trout etc... My great friend Chris Sandford has obliged with this refreshing play on the Klink... Photographs and words from Chris. Grateful thanks.

Why do so many tiers want to alter a classic fly pattern that has caught thousands, if not millions of fish? Well, as a wise old angler once said ‘The fish haven’t changed over the years, only the materials with which we try and catch ‘em.’ Every year more and more tying materials come to the market and I must say, I find it interesting to try some of them on my favourite flies. Can a pattern be improved? You bet it can!

I’m a great fan of Hans Van Klinken’s ‘Klinkhamer’ and its many variations. Traditionally, the body material is tan or olive dubbing that initially holds hundreds of little air bubbles as it enters the water. This has the effect of making the body ‘fizzy’ and is a great fish attractor. The problem can sometimes arise, that on a fast moving stream, until the body takes on a little water and pierces the surface film, the fly may not always ‘sit’ correctly.

I’m lucky enough to fish a very fast moving stretch of the River Itchen. The fish sit in a couple of feet of water and if you want to catch one you better make sure your fly rides the water perfectly! As a New Zealand guide once said to me ‘Your first cast is your best chance mate!’ Now I’m not saying that I haven’t caught fish with my fly floating on its side, or that I don’t dampen the body of the fly to help it sink. However, I did spend time last summer working on a body material that would pierce the surface film as soon as it hit the water.

For some inexplicable reason, the Klinkhamer that the fish find hard to refuse on that particular stretch of the river, has a body of bright yellow dubbing. Towards the end of last season I was tying some buzzers and finishing them as usual with a fine coating of Bug-Bond, when the problem of how to get the ‘Klink’ to sink was suddenly solved. Tie the body using bright yellow thread and seal it with Bug-Bond! I use ‘Black Hare’e Ice Dub’ for the thorax area and Niche Siliconised Polypropylene Yarn for the wing. I give the fly at least 5 turns of black cock hackle and find that black and olive bodies also work well.

Try it for those spooky fish in shallow fast moving water and let us know if the ‘Sinkhamer’ works for you.

Posted by David Edwards at 20:29 No comments: