Rainbows but no crock of gold... 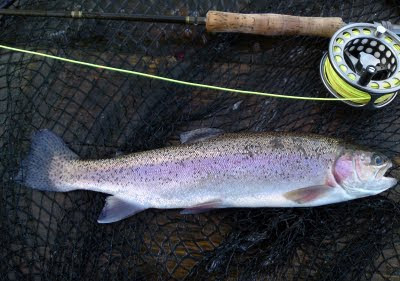 I’ve been working hard as usual and with various commitments I’ve found little time to fish.

Yesterday there was a break in this awful weather we are having at the moment and a trip over to the in-laws gave me the ideal opportunity to mix a visit with a four hour session at a trout fishery… I’ve caught rainbows there before but nothing had given a particularly gutsy fight.

I’m always on the look out for that OTHER species and the odd perch wouldn’t go amiss either. With this in mind I’m always geared up expecting to catch pike and am therefore not surprised that the fights that ensue are rather short lived.

I decided to set up three rods, floating line, intermediate and a pike sink tip. The three rods all had differing styles of fly. The intermediate was set up with a fluorocarbon and titanium leader with a Fastach lure clip courtesy of my fellow piking pal, Dougie Loughridge. I.m not sure on the titanium but the Fastach clip is the business and I’ll be ordering these off Dave Lumb this week! Could save a lot of wire…

So with the floater set up with a small perch fly I bought from the BFFI do a few weeks ago I set forth covering the water… 3rd or forth retrieve back I allowed the fly to hang close to me momentarily and BANG… fish on… initially I thought it was a pike based of the ferocity of the take… but soon all was revealed… a nice enough rainbow.

I changed rods and played about with the black deceiver on the sink tip… nothing doing, so back to the floating line… within a couple of casts I had a beauty of a rainbow that didn’t want to come to the net at all… I did half think that old Esox might have been happy with a bit of livebait on the end of the line but nothing was doing.

The fish was netted and released after a brief pause to get its breath back.

I had a miss on another mark on the lake and a few follows… nothing major but a nice afternoon all the same.
Posted by David Edwards at 13:19 No comments: 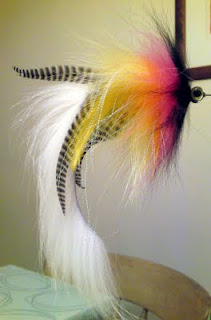 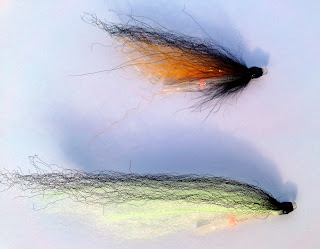 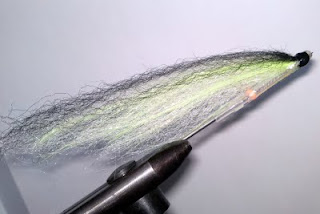 I've been working hard on a project and still am... I'll let you in on the secret over the course of next week. In the meantime...
Following the British Fly Fair International 2009 a couple of weeks ago I decided to start tying some tubes!
So a pike fly and perhaps some salty patterns for next year... the pike pattern was a hit with a pike taking the fly at my feet... sadly not hooked... but they work!
Posted by David Edwards at 23:08 1 comment: 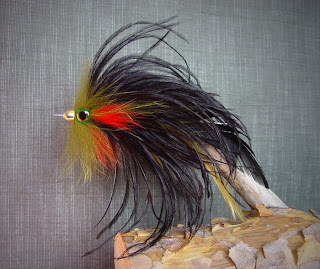 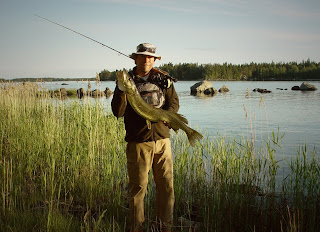 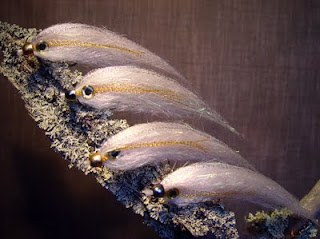 When I started this blog I was very new to pike fly fishing and still consider myself the tyro pike fly angler. The success I’ve enjoyed over the last 18 months or so has been enhanced by the input of various folk that I’ve accessed via the internet… E-pals!

“Simon Graham was born in England and grew up in South Africa. He has spent his life fly fishing the world’s best fisheries including, the waters of Africa, Australia, New Zealand, Venezuela, Costa Rica, the famous Wilderness of Vodlosersky national park in Russia, England, Scotland, Ireland, and the Netherlands. Over the years, his passion for fishing has developed into a specific love of fly fishing for pike.

In 2004, Simon moved to Finland because of the excellent fly fishing for Esox Lucius opportunities it offered. He now runs Baltic Pike Tours on Replot Island off the West coast of Finland. Simon also has his own successfully marketed brand of flies called “Baltic pike flies”. His informative pike fly fishing blog covers all aspects of the discipline, and it has emerged as a world leader in pike fishing information.”

Couldn’t say it better myself!

Simon's site is the "go to" pike fly resource on the internet!
Posted by David Edwards at 11:22 1 comment: