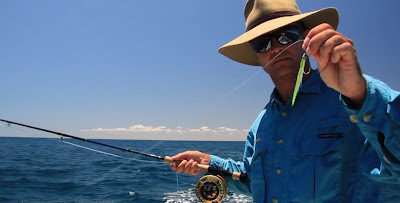 There has been a lot going on in the BUG-BOND™ camp and it continues to do so as well... However, I've been itching to write this piece for almost two months now and photos that appeared in my Inbox from Western Australia this week have me positively salivating! So here it is...

I was introduced to Jono Shales by my good friend Pete Gray in the US… both Pete and Jono have shared conversations across the ether and both share a common theme in being on the Mako Reels Pro-Team.

Pete said that I should hook up with Jono, as in his opinion Jono is one of THE guys in saltwater fly fishing.

I corresponded with Jono prior to his journey across Australia when he brought his new boat home to start his new guiding venture Exmouth Fly Fishing… at 40°C most of the time and with unforgiving fish – this is the place to test BUG-BOND™ to destruction! 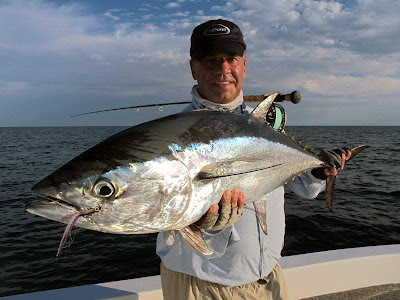 Following his return to Exmouth with the boat Jono started to play with Bug-Bond and immediately saw the benefits… the flies were the same patterns but they weren’t yellowing in the hot bright sun of Western Australia as epoxy would have done and more importantly the flies were lasting more than one or two fish… he recently described Bug-Bond in conversation as “bullet proof sh*t” and that roughly translates as “a good product”. We aren’t talking small fry either… these are trophy fish! 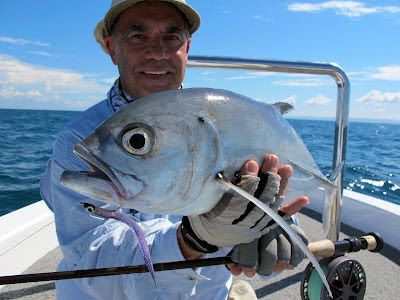 I’m really pleased that Jono has become a member of the Bug-Bond Pro-Tying Team… and he’s not only tying great flies BUT testing them to their limits. Amongst Jono’s most memorable captures to date were two juvenile black marlins caught “back to back”; free swimming on the flats of Fraser Island in Queensland back in 2006. Since then Jono has ticked many species off the piscatorial bucket list, recently cracking parts of the code for targeting milkfish in Exmouth. This has opened up an entirely new fishery and target species that was thought to be impossible to catch. Until now!

From our internet chats we both seem to share the same values and work ethics and Jono is reaping the rewards of his hard work and the results for clients are there for all to see. 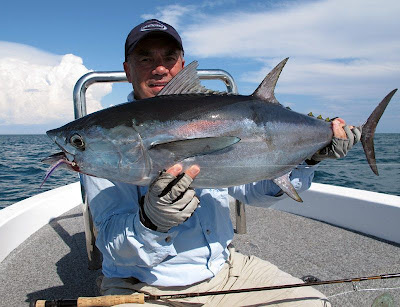 Click the link for Jono’s guiding service in Exmouth WA… I’m working on how I get there for the end of the year… got to test the gear in person!

Top photo is a screenshot of Jono from his promo video and the four remaining photos are of Jono’s client Don… four fish and one fly, congratulations Don… some going and welcome to the team Jono! 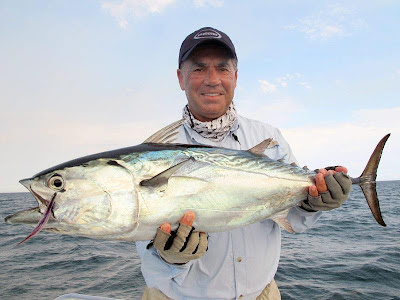 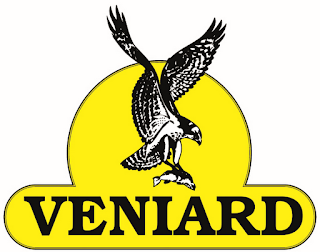 VENIARD TIES IN BUG BOND
Veniard Limited, one of the oldest fly tying materials firms around has tied up a deal with BUG-BOND™, the award winning, innovative and cutting edge resin finish for fly tyers. In January 2010, after extensive field-testing, the first Tack-Free light cured resin for fly tying was launched.  These resins offer significant advantages over other adhesives and varnishes, and these advantages have placed BUG-BOND™ ahead of the competition. Since then, the two differing formulae, ‘Original’ and ‘Lite’  have  enjoyed unprecedented success making it the most talked about new material in fly tying.
David Edwards, designer and owner of BUG-BOND™ comments:  “In September 2010 the BUG-BOND™ Pro-Tying Team was formed. We wanted to ensure that the team members covered the full spectrum of fly tying from small trout flies, realistic tying to large predator and saltwater flies. It is a truly global team who not only provide us with great feedback and product development ideas, they are also  keen to demonstrate BUG-BOND™ at events, shows and in the press. With TV performances, inclusion in DVDs and books during 2012, the amazing growth means it’s a necessity on the fly-tyer’s bench.”
With the continuing growth of sales, Bug Bond has announced that it is teaming up with one of the most established and well respected names in fly-tying: Veniard Ltd.
Peter Veniard explains the tie up: “ Veniard Ltd will now act as the main distributor for the product range. This gives the Bug Bond team the opportunity to develop the product and its applications further, building on its current position in the market. Our expertise and experience in the distribution of fly tying materials, both traditional and cutting edge, will ensure that Bug Bond is more widely available to tyers world wide. Of course, we will continue to service the established accounts and obviously extend the number of outlets considerably. This is an exciting time for both of us and we see this as the start of a long and lasting distribution agreement.”
Ends
Contact:
Peter Veniard
Posted by David Edwards at 23:38 No comments: