Fishing is a sport for all! 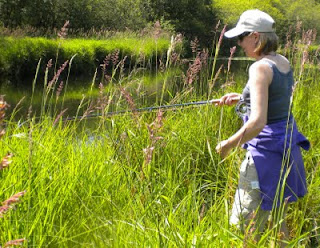 Fishing could be seen as a somewhat solitary past-time... think of the days you have spent on your own just listening to the deafening quiet as nature surrounds you. Magical!

Now think of the days that you have shared on the water with a friend, a guide or a loved one... the ability to share that moment is perhaps all the sweeter as you both have an empathy to being at one with nature and pitting your wits against the fish. With the other angler you have become a team and together you work to catch the fish.

Irrespective of race, creed/religion, ability/disability, age or gender; all sports should be inclusive... fishing and fly tying should cross all divides and make us a common people.

I’m not usually one for petitions but based on my longstanding association with womankind I think this one is worth nailing your flag to the mast for. http://www.change.org/petitions/sport-angling-community-let-s-start-talking-about-the-issue
Mutual respect!
Posted by David Edwards at 13:51 No comments:

Two more for the BUG-BOND team!

It gives me great pleasure to announce two new members of the BUG-BOND team, Jo Stephenson and Hendrik Wiegand.

I first met Jo at the BFFI in October 2010... I perhaps rather unfairly had Jo take my place on tyers row and had her tie a Thunder Creek pattern using BUG-BOND for the first time... I still have the fly and may photograph it and post it here with some of Jo's other flies.

Hendrik is a long term user of BUG-BOND and he approached me at the Dutch Fly Fair this year to show me some of his flies that he fishes deep from his bellyboat for large trout on Alpine lakes... an amazing combination of squirrel and foam feature in his flies. Again I'll be featuring Hendrik's flies over the coming weeks.

Both of these fly tyers bring much to the team. 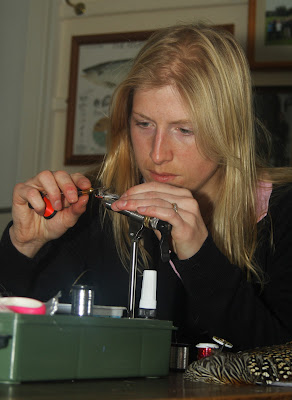 I live in a small country village in Suffolk with my husband Jonny and our little labrador “Eider”, 6 Ferrets and a guinea fowl called “Quentin” and I work as head of nursing at a veterinary hospital.

I first discovered fly tying about 7 years ago, when we were on our year away travelling. We were in a sports shop in New Zealand and I was intrigued by all these packets of feathers and furs, Jonny explained to me they were for tying fishing flies. I was fascinated how they (fly tying materials) could be used on hooks to create such pretty works of art that would then catch a fish. When we got home to the UK Jonny bought me a book and a few fly tying tools and a vice and that was me “hooked”.

Jonny is now teaching me the art of fly casting and actually using the flies I tie. I tie a lot of Bass and Pike flies but also enjoy tying Salmon and Sea Trout flies. I have recently had good success with a fly I named the Voshmied Killer which caught all of our Salmon on a trip to the Hebrides. Over the last couple of years I have been involved with the BASS society and have attended different shows and have demonstrated tying on their stand. 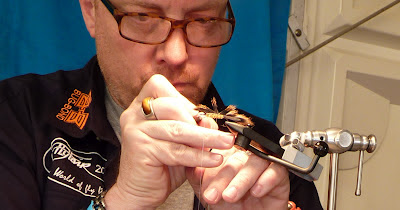 I was born 1964 in Hamburg. As I was first walking, I was about three years old, I was starting with fishing. In summer 1978 (it's now the 34th year) I tried first time fly-fishing with my Dad on a little river in Austria.

It makes a "Bang!" to me and it was the beginning of a great passion. In Summer 79 I met Frank de la Porte, at first he was my instructor, then as a friend; even now he is acts as my adviser and I’m proud about it. A few years later it made my holiday at the legendary Gmundener Traun-Austria, there I met Hans Gebetsroither. Since many many years I like to fishing and tying.

In the year 2009 I was fishing about 200 days in Stillwater, 100 days of them on a “Belly boat”. It was very successfully with many trout up to 8kg (16 pounds). On July 2010 I made a trip to Tirol-Austria to the Pillersee. With some information I tried my luck and the success was amazing. So I was still summer to autumn about 1.5 month over there. Till this time my very best Stillwater fishing. Thus 2009-2010-2011 I have learned much more about fishing, new patterns and about myself. Many of them I have refined. In the season 2010-2011, I co-organized several “Belly boat” events, that’s huge fun. I have tied flies in five countries (Denmark, England, Austria, Holland and Germany).

I like/love to move in the nature, on the water, to make a good cast, take the right fly and meet nice people. In almost the same manner I like to row on a "my" little river, take a seat and watching all around me. That's how I learnt much more. I call it 'wood and water is speaking to me' *smile*. What about the right fly? At the moment I have the best ideas if I’m sitting at the tying table and listening Chaka Khan or B.B. King during the day and Pavarotti in the evening. I also like to cook for friends.