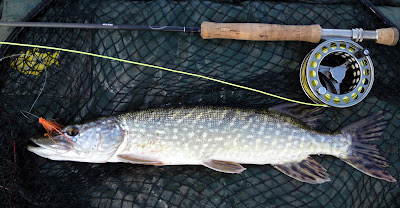 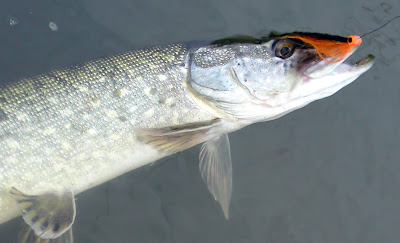 What an interesting day... up very early... almost the time before I went to bed! Half a tank of petrol later I was at a new water... rarely fished for the crocs and I'd been told that it would have to be a "dawn raid" so as not to excite the silver fishermen too much. Tales of a monster lurking beneath the depths are legend...
I decided to set the same team up as last Friday and explore the margins with the orange baitfish and then the depths with the bucktail Hollow Fleye. Initially I was going un-rewarded even though I could see swirls and bait fish jumping. I decided that a particularly weedy area might hold and gave it a go... I searched this mark for a good 15 minutes... she had to be here then my line locked up and pulled... and then the water boiled like a witches cauldron... in the midst of this the murky water fell away as a head the size of a shovel appeared. I damn near choked... this was going to be it.
With one shake of her head she left my fly intact and went for the depths... some suitable cussing occurred as I flailed the water attempting to tempt her back. In the words of the erudite Mr Homer Simpson... "Doh!"
I skirted the lake with the feeling of elation I'd found a pike... deflated that I'd touched lucky and lost the biggie! Ah well there's always next time. I had a play in a couple of other marks and satisfied myself with a couple of jacks... better than blanking! 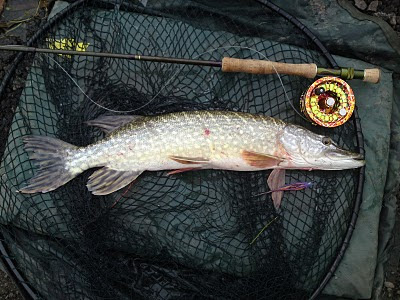 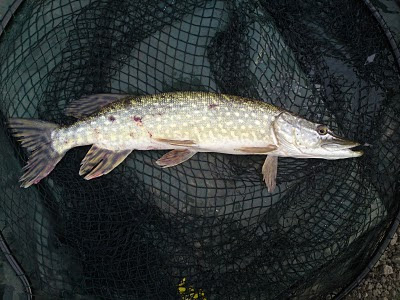 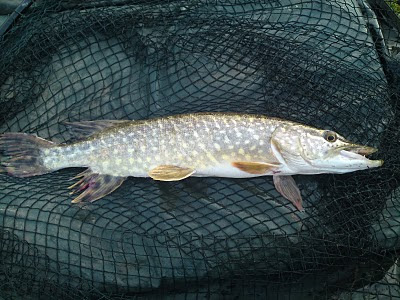 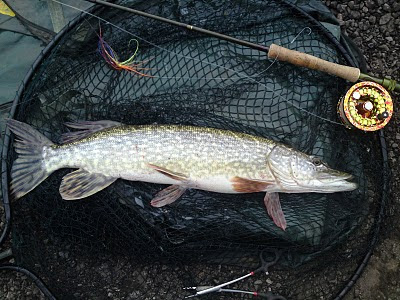 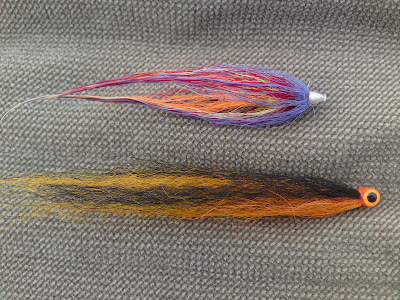 My great e-pal Simon Graham runs both PikeFlyFishingArticles blogspot (see side bar) and also has a shop BalticPikeFlies.

As many will know there is a good deal of synergy between us and I have been a long time admirer of Simon’s work and his blog…. Albeit his Friday choices are somewhat suspect :D Not even after 10 pints and 2 in the morning!

One of the things that Simon does that has intrigued me is the use of Eumer tubes… particularly the teardrops… if you go onto any website and look at the kit available it is confusing to say the least… what to buy??

I therefore decided to leave it up to Simon; he knows my style of tying so I gave him the amount I wanted to spend and left it up to him. 4 days later a package arrives and I’m like a kid in a candy store… a couple of phone calls to Finland and an email from Simon with links to the Eumer site and I was ready.

I tied a couple of patterns which I was sort of happy with and set the kit aside whilst I contemplated how I would use them… a week passed and I decided to tie the orange baitfish… orange under black is a great saltwater colour here in the UK… so I’m led to believe so I’ve been tying flies like this in readiness for my first full season on the salt! The advantage is that it is my “Go To” pike colour… so they won’t be wasted.

The orange fly is: Orange Icelandic sheep in the tail with SF Blend, two reverse ties of orange bucktail with a veil of SF Blend over and a black slinky over wing… Orange 6mm tape eyes from FunkyFlyTying and encapsulated with Bug-Bond – all set on a 15mm Eumer Tube.

The second fly is a multi-coloured bucktail hollow tied and was tied under the instruction of a new e-pal Andy Elliott… Andy is a semi-commercial tyer who supplies some of the best guides in the UK and Ireland with his flies. So Thursday evening sat at the PC I was instant messaging Andy and he provided me with an instant step-by-step in photo format and the Hollow Fleye pictured is what I came up with. It is simply different coloured bucktail tied on a 22mm teardrop and Bug-Bond at each stage of the tie.

So grateful thanks to both guys for their considerable input into my tying!

Tying fishing flies no matter how great are nothing if you can’t fish them and importantly catch with them… that’s the purpose… I appreciate that for some tying is an art form and I am truly in awe of some tyers especially those who have the patience to tie traditional Salmon patterns.

I am really very fortunate that I have a lake not far from me that I can test my patterns on… and in testing these potential saltwater patterns I still use knotable wire… as I’m bound to hook up into a croc or two.

So Friday morning I decided to head off… Orange baitfish on the floating line and the Hollow Fleye on the intermediate…. Both flies were armed with Sakuma Manta 2/0 hooks. 6am to 8.30am and the fishing was spot on… the two pike without the rod in the photo were caught on the Orange Baitfish whilst the other two were caught on the Hollow Fleye… So two patterns I’m happy with for the pike at the very least.

As a footnote: spawning on the lake finished 3 weeks ago but a couple of the fish were showing heavy love making marks… guess that’s what happens when you only get the opportunity once a year!
Posted by David Edwards at 07:52 No comments:

Sometimes it is good to just get out fishing... this greedy 2.5lb Rainbow fell to a black pike deceiver! Pretty good eating I have to say!!!
Posted by David Edwards at 10:32 No comments: 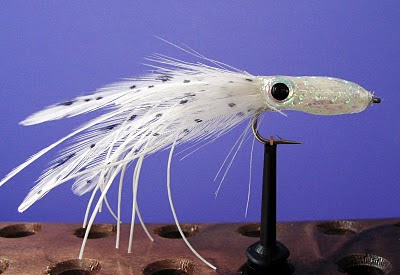 If you'd like to see this being tied in glorious HD click here to go to the Bug-Bond Group on Facebook... this will be the place to see more ties made with Bug-Bond...possibly the first light cured resin to cure with a NO TACK surface that is specific to flytying...
Optically perfect, resistant to yellowing, flexible - won't shatter, cures fast and doesn't have a sticky surface... Solvent FREE!
Bringing Pro-Tying to the amateur!
Posted by David Edwards at 23:11 No comments: