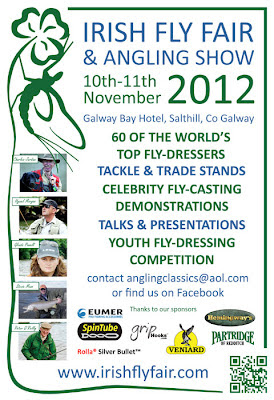 
Welcome to Ireland’s best fly-fishing event of the year!

The show will feature a range of exhibitors from all parts of the angling world; as normal, at its heart will be some of the world’s greatest fly dressers who will display their unique skills and craft. This year the show will be even better for the angling public as we have assembled the largest group of fly tyers ever to dress flies at any show in Ireland. At the moment, we have over 60 of the world’s most famous Fly Tyers from 15 different countries.

·There will also be a large number of trade stands selling all the top quality tackle brands and fly tying materials.

·We plan to hold a series of interesting and relevant angling talks from famous personalities.

·New for 2012 is a Fly-dressers’ Workshop with some of the greatest fly-dressers in the world passing on their wisdom and tips.

·Outside, there will be fly casting demonstrations and help clinics by famous anglers, among them Charles Jardine (England) Glenda Powell (Ireland) and Hywel Morgan (Wales)

. Free individual fly-casting and fly-tying tuition from APGAI - IRELAND. In their ranks they have some of the highest qualified instructors and best-known personalities in the sport of game angling on this island such as Peter O'Reilly, Stevie Munn, Paddy McDonnell, Joe Stitt and Jim Hoy. The Youth Fly Tying competition will be run by APGAI- IRELAND fly-dressers with some fabulous prizes for the kids.


There will be much more to keep you, the angling public, fascinated over the two days. This show is a must for the angling enthusiast. Why not encourage your local angling club to make it a club outing? Come along with your friends. You can take advantage of our new Two-Day Ticket at a special, cheaper rate and make a great weekend of it. There are special room rates at the event hotel for those staying the weekend, details under ‘Accommodation’ on the fly fair website.

Make sure to come along and give this event your support; this is perhaps the greatest game angler’s show in Europe and is the one event not to miss in Ireland this year.