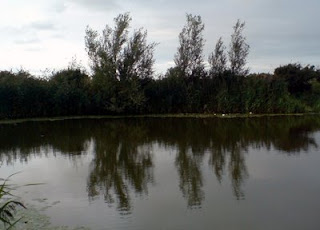 What a hard fought campaign I've had!
I decided today to pop down to the river again... not quite as bad as the August foray but with all that rain there was too much of a flow to make it worthwile. However, as I was there I fished it... true to form losing a lure to the river gods who continually seek to punish my impudence!
Anyway there were a number of conversations along the way with fellow fishermen and passers by that made the day enjoyable... apart from the annoying comments that some folk make, for example... "there was a chap last week who caught a massive pike over there!" I bite my lip and scream inwardly... "do I look bovvered!" I know they mean well.
Unlike me but I decided that I'd do the secret stillwater before dinner. After a quick cup of tea I drifted off to "the venue". There were quite a few carp anglers in attendance but fortunately all on the pegs I knew wouldn't produce pike... believe that, and you'll believe anything! Now I think in the ways of the Pike Angler's Club of Great Britain (of which I'm a member) I will leave out the location and the fly I used at "the venue"... it's a sort of unwritten rule you see... just in case another chap comes and fishes its socks off. It seems odd that a society whose aim is to preserve the pike are worried about its own members "raping and pillaging" waters... maybe I can understand it though. I like fishing, not politics and I have digressed. Where were we? Ah, yes!
Near enough ninety minutes of fly fishing as the sun dipped toward the horizon...
"Mark A" is on a straight bank lined with reeds, probably 9 feet out drops considerably, in the 9 feet zone it ranges from 6 inches to 4 foot deep. The first fly I had on although stood out in the murk of a carp water didn't have a massive volume about it, so I changed it for a fly of considerable substance... gaudy to excess as well. I had about half a dozen casts parallel with the bank and on one of the pauses it felt as if I'd hit a snag BUT instinctively I knew this was a fish and struck... the water boiled immediately with a pike on the end of my line... bullying him quickly to submit I got him to the net (thanks to a carper waiting in the wings). There isn't a photo of this 6.5lb pike... Why? Well I decided to put it on the unhooking mat... wrong move... must have spotted the water and made a dive for it! Darn it!!!
"Mark B" was an absolute gift from the last person I spoke to at the lake... he suggested the bay opposite to him... out of respect for his float I hadn't fished it and the platform on the opposite side of the bay was a difficult cast. I had visions of tying up the fly in a tree. 2nd or 3rd cast in and "bang" we were fish on again. The photo above is from my phone on the camera... so quality isn't good! BUT it is a photo of the 2nd pike I caught on a fly(albeit smaller at 3lbs)... 2 pike in one session on the fly... fantastic...
I have reflected on today and have to say that I feel that I earned those fish... I feel elated!
As a post script there are folk that worry that pike on the fly isn't good for the fish. Well both fish were landed quickly and were returned quickly as well! The big difference for me is the hook. Partridge Ad Swier pike hooks, they just drop out... no nasty trebles. It has me re-thinking trebles!
Posted by David Edwards at 21:52