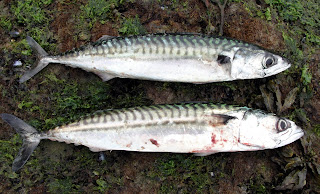 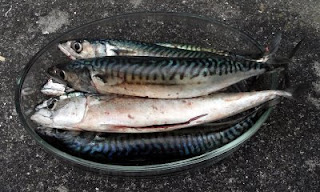 Rather than camping with the boys and having the remnants of a miserable August impose its wrath on us under canvas we opted for a friend's cottage on Anglesey!
With the car loaded up last Wednesday we set off with all but the kitchen sink... "Grandma Margaret's" cottage has to be one of the most idyllic retreats on earth and the setting is fantastic. Such is the impact of the place on me, that returning to reality is hard!
I decided in addition to the usual armoury of fishing rods to pack the bikes for the boys, giving them their own transport to "cruise the strip" as it might be termed in a built up beach side resort such as Cannes! This back of beyond boasts a church, pub, cafe and renowned sea food restaurant... oh and an original cottage set up as a museum!
The weather was good to us and during Wednesday afternoon we stopped off at the fishing tackle shop in Amlwch... Telboy Tackle is run by Terry Thomas and is situated between the the Dinorben Arms and the Premier Stores. A veritable Aladdin's cave for the angler whether sea, coarse or game fishing. He can arrange sea fishing trips on Tuesday and Thursday each week. Well worth a visit to stock up on fresh bait.
Will and I tried our luck on the Thursday night at ledgering for plaice and bass and after a couple of hours we both retired empty handed... nothing new there!
Having set a challenge of "Catch, Kill, Clean, Cook & Eat" I thought it best to ensure that we did catch something... else we'd go hungry! So off to Moelfre and the rocks behind the lifeboat station. Two things about this mark, the first is, it is a tackle grave yard BUT second you will catch here more often than not. I decided to put both boys on the cheap carp rods with feathers and a 2 ounce weight... with the advice "as soon as it hits the water, wind the handle!". Both managed to attach themselves to the bottom so I switched both to spinners.
I initially went onto a Dexter wedge hoping for bass but soon decided to switch to a line of foil feathers with a two ounce lead. The Harrison designed Veal's 4 Sure Spin 9ft rod certainly had the weight ripping the feathers out into the distance and on the third retrieve I felt that we were on a home run. Cranking the handle I was overjoyed to see three excellent sized mackerel beneath the surface. All fish were dispatched quickly and popped into the bag.
Not being greedy I let William take my rod and the mark, a few casts later he was in! I watched him excitedly bring two mackerel home and on landing them... well, maybe I won't write what he said... somewhat overcome by emotion his inhibitions were laid bare to the world! Enough said!
Sam took over the rod but linked with a fast falling tide and a chap, who by now was insisting that his float should come across Sam's line of fire meant that Sam lost the terminal tackle and went home empty handed. To compound his misery I put a line of pink shrimps on one of the carp rods and pulled in a solo mackerel! I did feel for him.
With six in the bag we went off home... rather satisfied and a degree of smugness that can only come with catching fish! Back at the cottage I showed the boys how to gut and clean the fish... I have to say that both of them performed the task without complaint and did it to a higher standard than the fish counter at our local supermarket! I was proud of both of them.
We had put the White Eagle at Rhoscolyn as the banker for Friday night... great gastro pub/restaurant... food was good BUT just have a main and a dessert unless you are greedy! Overfaced or what...
Saturday we had the mackerel for tea... I dislike throw away BBQs but when the devil drives sometimes that is all there is to hand. We headed and tailed the fish and just managed to squeeze the six on one BBQ on the beach! A sheet of foil over the top retains both heat and moisture... 12 minutes later they were being wrapped in foil and put in a Thermos bag and back off to the cottage where Janet was preparing the rest of the meal.
Freshly cooked fish with a hint of smoke, a squeeze of lemon and rocket from our own garden... what more could you ask for... apart from a glass of sauvignon blanc to wash it down!
So we met the challenge and succeeded!
Please not we were responsible with the BBQ, we doused it with water from a rock pool and when sure all flame/heat was out placed it in a bin!
Posted by David Edwards at 15:58

Made me hungry that tale.... I love Anglesey too.

They were so tasty... wish I was there this weekend the rivers will be ruined with this much rain!