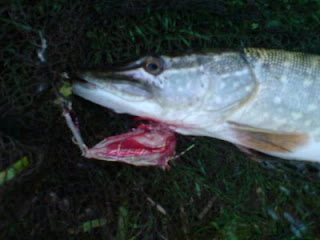 Down to the water for 7am with very few there... still morning with a mist rising from the water. Bait fish moving and jumping and pike striking like there was no tomorrow. A real feeding frenzy!

So with my newly tied fly on the line I decided to fish it. Once it lost its buoyancy it moved with a the grace of a ballerina... the only difference this has a sting in the tail! I fished the first bay and noticed some excessive bait fish movement a few casts and changed position... quick, quick, pause... and bang "fish on!". Bit more of a fight with this fellow but succumbed relatively quickly. Out of interest I weighed it in the net and came up at 5lbs... I've been doing myself short... my first could have been a double!!! The Ad Swier hooks again excelled themselves and I quickly unhooked the fish and allowed it to recover and away he went!

I moved pegs and moved up the lake a couple of casts later I missed a take and had a pike roll over the fly... annoying but soon forgotten. Just can't beat catching a fish at the start of the day!

There is a big fish in this water... I can feel it in my bones.

A note to myself I must start taking photos with a proper camera and not the Mickey Mouse one on the phone!

Hi David,
Simon Graham here from Finland.Wanted to just say it is also nice to see another pike fly-fisherman with a great blog page.I have put you as a contact on my own blog as I have been enjoying your articles and would like to keep up with your antics whenever possible.
Tight lines and have a great weekend