It's a lazy wind that goes right through you!! 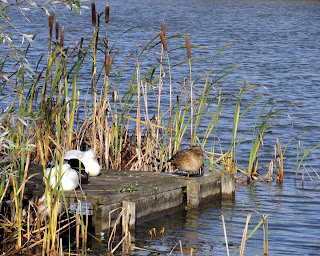 Two forays over the past few days... to say I have been fly fishing in a cold wind was an understatement... although with thoughts of ordering an intermediate line it looks like I'll be plumbing the depths to wake esox during the winter months.
Friday was killed by an east wind... no takers, no bait fish and no swirls! Having said that, it was a reasonably fine day... a good day to be out and early morning I saw a peregrine hunting and late afternoon a weasel... so it wasn't all bad.
Today I grabbed an hour or two in amongst the rain... missed a take and watched the chap with a sardine take a jack from the bay by this peg... always the way BUT I was just about to have a go at that swim... it was a day for dead baiting.
Now do I persevere with the fly or do I pack the dead bait gear at the end of the week??? I can feel a "snurge" moment coming on!
Glossary: Snurge (n) to snurge (v)... a foul smelling attractant (now that's a contradiction in terms!) a secret recipe!!
Posted by David Edwards at 23:10

I think first off I'm going to get a set of polyleaders which should assist... whilst I decide on which intermediate! It should also save on the faff of having to change spools... or in my case reel as I don't have a spare spool for the 8Eleven.

Hi David: One thing I have found a decent blog called the "Urban Fly fisher" and he has a decent forum for pike fly fishing on it.Go to my blog list.I see Dougie takes part on there.Maybe something to be part of and some interesting discussions to boot.
Have a great weekend.
Si