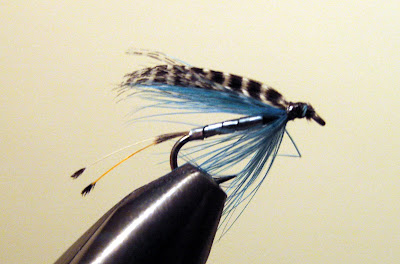 My dad's small aluminium fly box yielded these examples... what does the fish see? Colour as in the first one or a profile as in the second... "It looks roughly like the last one I ate... Darn it! That one has a hook!"

They must see colour, otherwise I wouldn't tie big gaudy fluorescent ones for the pike! The interesting thing about that tin of flies is that they must span a 20 year range... my dad age 15 to 35... that means that some of the flies in the tin are 62 years old!! 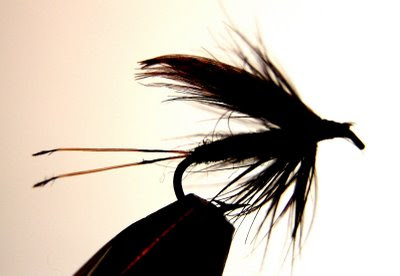 Anyway! Yesterday was a drizzly sort of day… on and then off BUT it was good to be out! I did a couple of hours in the morning, getting into the office for 10am and then left at 3pm ish to get the lake for last couple of hours of light… that drifted into darkness.

There wasn’t much movement; I saw a few fry move and a bow wave with a fin nudging the surface of the water. There was only one other fishing the pool and he had a jack to a dead baited sprat between 9.30 and 10.30 but nothing else!

I didn’t mind not catching… I spent time perfecting the cast and enjoyed being out.

It got me to thinking of my most memorable fish:

1) First recollection is of a small brook brownie… I was aged 4/5 and it was on my first rod and was taken on a lady bug type spinner. I remember it out of the water and my grandmother cooking it… that’s it!

2) Roll on to age 11 or 12… Criccieth in North Wales and a Mackerel taken on a spinner on a light glass fibre spinning rod… boy did it fight!

3) Off to university and field work (I was a geologist) and the Isle of Mull... a borrowed fly rod and flies and a small Scottish loch and another brownie

4) Some years hence with a small telescopic spinning rod and a perch pattern size 0 Mepps spinner... a small estate on the Morvern peninsula and a small brook... a small pool beneath a drop and cast the spinner in... I missed the take but went back the next day to account for the brownie!

5) First rainbow on my dad's split cane rod... I'd missed a trout on the Dee at Llangollen in Wales a week earlier as I couldn't cast far enough as I only had thigh waders. I'd borrowed a line and reel from Meadow fisheries in Cheshire and caught a 2lb 'bow much to the disgust of my cousin!

6) A perfect perch on a maggot in a newly stocked pond next to my friends' farm... eclipsed only by the perch William and I caught in Ireland... he was 6 and I was "helping" him fish!

8) Barracuda and Jack Trevally in Egypt... the top lure being a Rapala silver Countdown 9cm and all from the marina wall!

9) My first double figure pike and on the River Dee... how sweet after blanking for so long

10) Mackerel bashing with the boys in Anglesey... can't beat the taste of fresh fish

Blimey that was my top 10 and I didn't get to the pike I've caught on the fly or the small roach on a French lake, nor the fish that have dropped off the hook!!

I'm always amazed at the intricacy and sheer beauty some of these flies come in.It is an art form,no doubt about it.Tell me David, did your Dad tie these himself?

No, sadly he didn't tie his own flies... I remember a lad in primary school coming to my house and he'd already started tying flies and I remember that we tied a simple fly with a red tail, peacock hurl and a red hen hackle... I'll dig it out... I think I still have it... I was aged 10!

I was at a fly fishing fair this autumn in Helsinki and there were 6 kids all around the ages of 10-12 and the quality of their creations were astounding to say the least.The young girl rattled of two Pike flies that I can only describe as works of art.One lad had been tying flies with his dad since he was seven and had already won the u16 world fly tying championships.I wish I could have understood the little chap as it sounded like he knew his stuff and there must have been over 50 old boys watching in amazement as He tied.