Caledfwlch - take me up & cast me away! 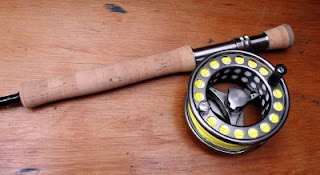 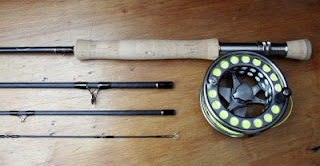 I took a call from Harrison Advanced Rods… my old friend Mike Helliwell was on the phone “Guess what?” “We’ve built your rod!” “Thought that you might like to try it over Christmas”

Knock me down with a feather... they said that they were building it in January!

Well all that blanking on the river melted away as I popped over to Liverpool to pick up the rod… Mike met me and took me over to another part of the factory. A plastic heat sealed bag was handed to him. I could see that the bag contained a black rod bag. I was given the bag and handed a Stanley knife and slit the plastic with the precision of a surgeon’s first incision on the cutting table. We were in… I took out the rod bag and undid the Velcro tabs… no ties to get in the way. I unrolled it and looked at the 4 openings… I could feel the full Wells handle and gently took the handle from its bag.

The cork fighting butt and then the titanium Struble reel seat, what engineering… Then… the ground carbon blank… black whipping with silver tipping above the keeper and also on the female ferrules… absolutely stunning. Like a couple of excited schoolboys we assembled the rod. Perfect!

The name had been finished in silver as requested… the Harrison Advanced Rods logo with 9’ 9/10# set in a small font. Next to the all important makers mark was the name chosen for this rod an indeterminable link for me with my past and who I am; “Caledfwlch” an old Welsh name pronounced phonetically Kaled-voulch… Who or what is/was Caledfwlch?

Caledfwlch was the most treasured possession of Arthur (King Arthur) and was the original name for the sword, Excalibur. The word Excalibur was a French interpretation of the name Caliburn or Caliburnus which was in turn the latin take on the old Welsh name. I have my dad's (his name is Arthur) fly rod which he asks about so I counted that as a treasured material possession and as he introduced me to fishing - so perhaps a fitting choice of name.

The blade of Caledfwlch had two inscriptions one on either side, the translations are “take me up” and on the reverse “cast me away” perhaps an adequate description of the mechanics of fly fishing. I thought this mythical but important legend that I grew up with (I'm from Wales on one side and Northern Ireland on t’other – that is the “who I am”) again lent its name to the rod. By way of an amusing modern twist I discover today that Lara Croft in the game Tomb Raider; Legend, Lara has to find Excalibur which has been split into 4 pieces and she is charged with finding the 4 elements and re-forging the sword. The twist is that the rod is a 4 piece rod!

Although I’m fiercely proud of my Celtic heritage I was pleased to see the Union Jack sticker on the rod… proving that although we don’t have a large manufacturing base in the UK as we once did, we can still produce goods of exceptional quality in the UK.

As ever the proof of the pudding is in the eating BUT this is the same blank as Mike’s own rod… I know I won’t be disappointed!

I can only thank my friends, Steve Harrison and Mike Helliwell and the rest of the team at Harrison Advanced Rods for creating my ultimate rod… I won’t claim that this was the last rod to leave the factory in 2008 but it would be nice to think it was.
Hopefully we'll have quite a few adventures with this rod and I'll document them here... the rod primarily to target pike will be used to entice other freshwater and saltwater fish into taking a fly or two!

Happy Christmas all!
Posted by David Edwards at 23:55